Time has become a vaguery more quickly than I had anticipated.

I had every intention of writing my blog for release every Friday, and yet here I am writing it on Sunday.  And I know it’s Sunday because my watch tells me so.  The same watch that remained on yesterday’s time zone for most of today, because what does it matter what time it is anyway? 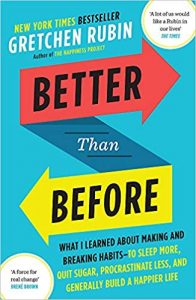 I don’t entirely believe in coincidences, and I don’t think the fact that our book club read last month was Gretchen Rubin’s Better than Before is one.  The book is all about our habits and how and why we make and break them.  Barely a week before the schools were closed here in the UK, I was listening to the section about the best time to begin a new habit.  One of her three areas of research around this was the concept of the clean slate.

Here we were, standing on the edge of our known normal, about to enter uncharted territory.  We were being offered a clean slate.

For some of my clients and friends, they had a weight taken off them relatively quickly with the announcement of the £10k grants for businesses in receipt of small business rate relief, and 80% of wages covered for furloughed staff.  I had to wait until Thursday to find out what might be available to me, as a member of the ranks of the self employed.

I’m not perfectly zen.  I had wobbles in my sleep and was plagued with weird and horribly realistic nightmares of Mr Ollivander the wandmaker having coronavirus (reading Harry Potter before bed can seriously impact on your dreams!) and of people I knew doing things that were very out of character.  For some reason, the things we remember from our dreams and nightmares can sink into our conscious minds as if they are, indeed, real.

I had conversations with people who were very obviously stressed, and tried to put them at their ease.  I put the Hub to bed, including speaking to the people who provide our cleaning to let them know that we wouldn’t need them until this whole thing is over.  They sounded relieved, which was in turn a relief for me.  I turned off the heating, brought whatever looked like it might be useful home and resigned myself to being in a strange limbo where I didn’t have a lot to do but couldn’t quite switch off yet.

The in-between-ness of it all has had a real impact on my concentration.  I have managed to avoid the news channels and my social media is far more full of jokes and “describe me in a word” games than the doom and gloom.  I am trying to block out the things that could shift my focus out of my area of influence, and yet still my concentration has been struggling. 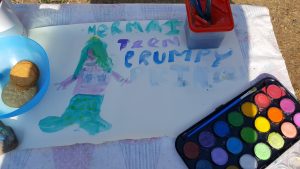 Home school was a challenge.  She has been “going to school” since she was two years old.  Nursery for a day and a half a week gradually increased to four days a week and then full time from the first day of primary school.  She is very used to the routine of arriving, hanging her bag on the peg, taking her drink bottle and book bag into the classroom, seeing her friends, doing spellings and so on.

The first day of home school, she wanted to sit down in her uniform and do work.  The second she didn’t.  Some days she did the maths work, others she just wanted to read her book in the garden.  She uploaded something onto the system that her teachers can see each day, and they responded as kindly to her random photographs and drawings as they did to her maths work. 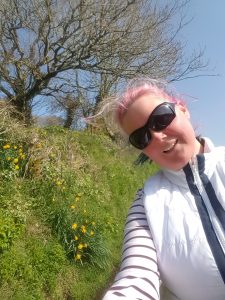 The sun was out – glorious sunshine that we have been craving here in the South West after months of relentless greyness, rain, sleet and hail.  We were out in the garden in vest tops, and until the weekend I was in cut off trousers.  It was possibly setting us up for disappointment, as surely lockdown won’t involve endless days of early summer? 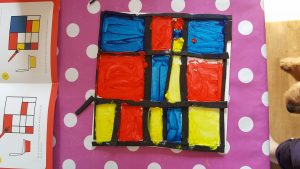 Now that it is the Easter holidays, and her routine should involve spending a day with my parents, a day with our childminder and a day at sports club every week, I wonder how our days will unfold. 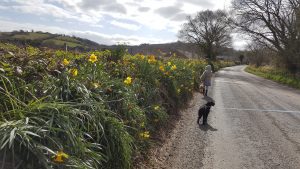 We quickly dispensed with the idea of following any kind of timetable.  She hasn’t once even watched Joe Wicks delivering his daily PE class to the nation.  Instead there has been as much time as possible spent outside.  The dogs are loving it because they get walked much further than the usual circuit of the churchyard, and they get company.  There have been numerous painting sessions, either out in the garden or at the kitchen table.  We have taken advantage of the free educational downloads on minecraft, the newly launched Disney Plus service and Toby’s Netflix account.

Our first adventure, in short, has been to slow down.

I think it was just what we needed.

How has your first week been?