You are here: Home / Goals / The Mid Year Review 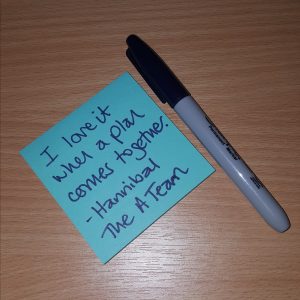 I don’t think anybody would disagree that 2020 has been a pretty weird year thus far.  We had the catastrophic bushfires in Australia, locusts in Africa, global pandemic and probably the biggest surge in consciousness around racism since the civil rights movement in the 1960s.  Much of it has happened against a backdrop of lockdown, furlough and a sudden appreciation for keyworkers and teachers.  For somebody who loves to plan, and then stick to the plan, it’s been tough.

At the beginning of the year, I asked my TAWN Team members to come up with a word for the year, and five key focus areas.  There was a general feeling of positivity and “this is our year!” enthusiasm in the room.

Track forward a couple of months and we were all trying to work out what this new landscape meant for us.  The schools closing meant having our kids at home.  This was not going to be like the summer holidays though, where you might be able to bribe them with a play date or cinema trip tomorrow in exchange for peace to work in today.  This was us attempting to home educate with no idea what we were doing.  This was us becoming the sole source of company and entertainment for our kids too.  Trying to maintain, let alone grow, a business in this new world was not going to be easy.

We weren’t all in the same boat of course.  I saw some people on social media who were clearly loving lockdown on furlough pay.  I also saw friends going to work in the hospitals before they had been upgraded from student status.  I saw people who were sick and took a long time to not feel like death – I have a friend who is still very ill after four months and her GP has given up trying to diagnose or treat her ongoing symptoms, because they have no idea what they’re dealing with.   I saw people being pushed to the brink by the relentlessness of their children and I saw other people who were lonely because they were completely alone.

I’m a widowed single mum of one, so our experience of lockdown has been pretty intense in that it’s been just the two of us.  Up until she went back in to school part time, we had barely been apart for three and a half months.  Luckily, we have a house that is big enough to not be in each others pockets all the time, and a garden.  Anytime I felt overwhelmed by it all, I would remind myself that there were women living in cramped apartments with children who had no access to outside space.

I have other friends who are single parents, who have gone through regular risk assessment and reassessment in order to share custody with their exes on alternate weekends, or weeks.  Then there are the couples who work together and they’ve managed to keep on top of their business while home schooling their kids in a far more involved way than I ever managed.  We have all founds ways to cope, and our kids will probably all look back on this time more fondly than we fear.

When it comes to the business though, how have we fared?

Well, I had grand plans to get the edits done on my book before the Easter holidays but school closing a week early put paid to that.  I’ve been trying to get them done while Tilly is at school, but it’s a much more involved process than I had deluded myself into believing!  If I get them done and the book away for second readers before the summer holidays start in a couple of weeks, I’ll be chuffed to pieces.

Then there was my membership, that I was going to soft launch at the end of March with a 90 day planning workshop…. yeah, possibly the worst timing ever?  So I put it on the back burner.  Once I have found a tech angel to do the bits that are most definitely “not my zone of genius”, I will move forwards with this again.

And how about my course?  Well I have been reading a lot and throwing myself into training on how to create truly transformative courses, unearthing a whole bunch of awesomeness that I can add to what I have already created to make it better.  It’s all about the time to do it now.

Were those three of my five focus areas?

My five focus areas were continuous development, self care, mindset work, days off and spending more time with Tilly.  I have nailed the absolute max out of these five areas.

This was the first year I have changed our team’s goal setting from traditional goals to focus areas, and it feels like a sign from the universe, because focus areas allow us to be much kinder to ourselves if the wins are not leaping off the page.

Completing my half year review made me feel proud of myself for what I had managed to do, and excited for what’s ahead.

I am very much looking forward to the next team meetings and finding out how my TAWNies are feeling about their half year reviews.

How are you feeling about this year and what you’ve learned from it?

July began on Wednesday and offered us all a clean slate from which to reset and relaunch if we felt the need to too… but I’ll let you in on a secret.

It doesn’t have to be a Monday, or a new month or new year.

All it needs is a decision.

If you decide to change your outlook or trajectory, you can.