According to the internet, the Yew Tree symbolises death and rebirth.  Given what has happened in my family over the thirteen years my parents have lived in Yew Tree Cottage, there may be some truth in it. 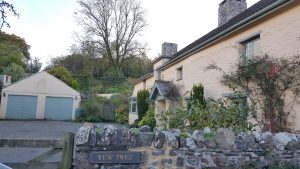 We said our goodbyes to her this afternoon, and another family will start building their memories in her tomorrow.

Cleaning the empty rooms yesterday was a cathartic experience. 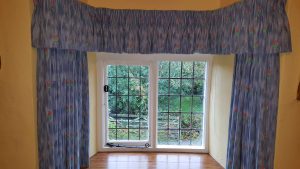 The front bedroom with the blue curtains was where I slept when I came down from London for weekends, and when I lived there.  My favourite memory of that room was when Tilly was a newborn and the midwife came to weigh her.  I took off her nappy and as I was about to hand her over, she weed all over me.  I was laughing, my mum was laughing and the midwife was laughing.  Then Tilly followed up with some liquid poo and we were all laughing so hard none of us could move to stop it hitting the carpet.  Poor Tilly had no idea what was going on, but it was hilarious.

Behind it, the back bedroom absorbed my grief the way dog hair absorbs tears.  It was set up with two arm chairs and a table as a little sitting room back then.  The chairs were perfect for feeding and I paced miles around that little room trying to get Tilly to go to sleep.  The night feeds were the worst.  In the stillness of the house, with no light or noise from outside, it would hit me like a punch in the gut.  He’s gone.  Sometimes I cried silently, sometimes I didn’t.

Next to that room is the shower room and no question my strongest memory in there is dead legs.  In the latter stages of pregnancy, the pressure on my bladder was intense.  I could pee and waddle less than ten metres to bed, get comfortable and then feel like I needed to pee again.  So I ended up sitting on the loo playing sudoku and then my legs would go to sleep and I’d have to go through the pins and needles stage before I could even dream of getting as far as my bed.  So many nights, so many pins and needles.

The little room was decorated for Tilly with big Winne the Pooh wall stickers.  She loved her sleepovers, even if sleep wasn’t much of a feature.  Sorry Mum.

The funny step down then up bit of the landing that the dogs loved to run and jump across.  Tilly did too once she was big enough.  From the lower bit you could go down the ancient turning stairs.  The dogs loved waiting on the bit of landing just to the side so that as you came up the stairs you could pause for a face wash.

Step up again and Mum and Dad’s room was off to the left, or you could go straight ahead into the bathroom.  The lovely big bath where tiny Tilly would play with her singing penguin or the floating octopus.  Through the other side out into the hobby room where Mum and Dad had their computers.  Oh the ours I spent in there looking at photos on Mum’s iMac.  It’s also where Oliver asked my father’s permission to marry me, and where Mum accidentally poked me in the eyeball.  A mixed bag for that one!

Down the back stairs into the boot room, the scene of thousands of happy dog meals, and sharp left and down again into the kitchen.  The heart of the house.  The kitchen is the room where everyone stood and talked for hours, interspersed with Mum suggesting we go and sit in the lounge but nobody moving.

The window seat in the bay, with the table and chairs was the backdrop to most of our family meals.  Tilly’s first bath was on that table too, squirming around in the plastic tub.  It’s where we planned holidays and gardens, and looked at floorplans and laughed and played games.  I don’t have to try hard to see toddler Tilly and my dad under the table having a tea party either.

The dining room was beautiful but we only really ever used it if there were too many people to fit in the kitchen.  My memories in there are almost all Christmassy.  My Dad and my friend Van debating the virtues of Catholicism was an interesting one.  It was the first time she wasn’t going to get home to Australia to be with her parents for Christmas, so I brought her home to be with mine.

Oliver finding the most hilarious unfortunate wilted candle on the Christmas before we made Tilly.  My Dad toasting absent friends the following Christmas, after Oliver died.  Tilly covered in Christmas pudding and very pleased with herself too thank you.

The other thing I’ll always associate with that room was the cards.  The sideboard and the table covered in cards and some of them were congratulations on your new baby and some were in sympathy. They were mingled together like my emotional spaghetti.

From there you could go up the turning stairs or down to the lounge room.  More Christmassy memories in there as well.

So many happy memories.  Some gut wrenchingly awful ones too.

Mum went through diagnosis and chemo in their first year there.  I lost Oliver.  We lost all three of my remaining grandparents.  Dad was diagnosed.  Through it all, Yew Tree felt like a safe haven.

May her new custodians love her and look after her, for she will doubtless look after them too Xx